The Trametes versicolor mushroom has a long history of medicinal usage, dating back at least two millennia. The mushrooms gathered in the wild, grow as dense and overlapping clusters of fruiting bodies on dead or living trees. The plush brownish mushroom caps have a velvety surface with a distinctive pattern of wavy bands of dark and light colour. Trametes versicolor is also found throughout the cool wooded temperate regions of Europe and North America. It belongs to a class of traditionally used mushrooms known as Basidiomycetes. Of the 20,000 species recorded, Trametes is the best known commercially for its medicinal applications. 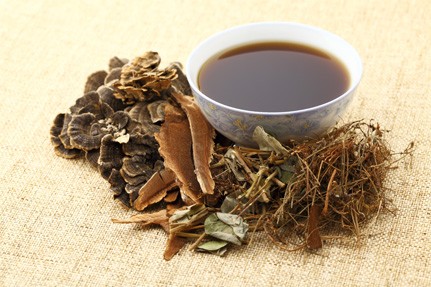 Historically, Chinese and Japanese herbalists harvest the fruiting bodies of the mushrooms, which are then dried, ground to a powder and made into a tea. This simple hot water decoction or tea according to Chinese Pharmacopeias, was used to dispel ‘dampness’ (meaning to deal with liquids and oils that are not adequately metabolised thus becoming toxic), reduce phlegm, treat respiratory tract infection and support liver health.

Based on the reputation of the mushroom’s wide ranging therapeutic benefits scientists worldwide began to conduct controlled basic and clinical research (over 400 published studies) on hot water extracts from Trametes versicolor. The researches have found that the main therapeutic ingredients in the extracts of Trametes versicolor mushroom are complex polysaccharides including those bound to proteins that are intricately linked to the immune system enhancement by the mushroom.

The health benefits of Trametes versicolor extract (Coriolus versicolor, Yunzhi, Kawaratake, Turkey Tail) is well known in Asia and it has been used successfully for many years. It is only now that the rest of the world is starting ‘catch up’ and learn what they have known about for decades.